This weekend I was out at the Unicorn City Airport to pick up the SMG from another one of her endless training-uri when I saw that they were building a new gas (petrol) station alongside the main east-west street here in Cluj-Napoca. The bulldozers were still on site and most of the asphalt has yet to be poured but strangely the large sign with illuminated price numbers was working, so I imagine a few drivers have been temporarily fooled into thinking it was open for business.

I also realized that I was probably one of the few people in this town to recognize the owner of that (future) gas station, already proudly heralded on the sign out front – SOCAR. That’s the state-owned oil and gas consortium completely controlled by the government of Azerbaijan. I wonder how many (future) drivers will be pumping gas into their vehicles there, completely unaware that their money is going to fund one of the worst dictatorships on the planet.

Just a few weeks ago, the “journalists” over at Antena 3 were frothing at the mouth when they discovered that Ioana Basescu, the daughter of President Traian Basescu, has done business with Gazprom.

Ioana Basescu is a notary public and the extent of her “business” with Gazprom was notarizing some legal documents for them. Actually, Ioana Basescu’s business was with a Romanian law firm named Tuca, Zbarcea and Associates, and it is the law firm who has business with Gazprom. Only it’s not even Gazprom but one of their subsidiaries, a Serbian-based company called NIS Petrol.

The law firm, Ioana Basescu and Gazprom (actually NIS Petrol) are all doing legal business here in Romania. It’s just the sheer fact that Gazprom is based out of Russia that caused the Antena 3 journalists to become rabid, convinced that something more nefarious was going on than a notary being paid to legally sign a legal document between two legal corporations doing legal business in Romania.

Even if you hate (Russian President) Vladimir Putin for his batshit crazy beliefs about homosexuality (which are textbook views promoted by the Orthodox Church not only in Russia but also here in Romania), it should be noted that Gazprom is a publicly traded company with its stock listed on the open market. Furthermore, NIS Petrol does all of their work in Romania in combination with East West Petroleum, a Canadian company, Moesia Oil and Gas, an Irish company and Zeta Petroleum, a British firm.

Therefore a dollar (or leu) spent at a Gazprom-branded gas is actually going towards a consortium of companies, each of which is partially or wholly owned by stockholders. But every cent (or ban) spent at a SOCAR station goes straight to funding the brutal dictatorship of Azerbaijan, which enjoys arresting and torturing journalists when it isn’t busy gunning down university students.

Luckily for all the Russophobes in Romania who don’t want to support Gazprom, SOCAR has good news! They are constructing gas stations in this country at a rapid clip and now you can support the Aliyev family get richer whether you fill up your car in Buzau, Bucharest, Focsani or (coming soon) Cluj.

After wiping the bitter taste of SOCAR from my mouth, I made my way into the airport and saw nothing had changed since the last time I was there. In fact, nothing’s changed at all since I wrote about it in 2011. It’s got the same moribund terminal, with one sad and lonely coffeeshop (with nary a customer), completely empty retail space and the three bored employees of car rental agencies sitting around and gossiping.

I was hoping at least to find some fun new pamphlets or brochures to read while I waited for the SMG’s plane to land but sadly I only found one from last summer touting (the judet/county of) Cluj’s improved water sanitation system. I took one home to keep by my bedside so I could have some reading material in case my insomnia ever comes back.

It was only later when I noticed this: 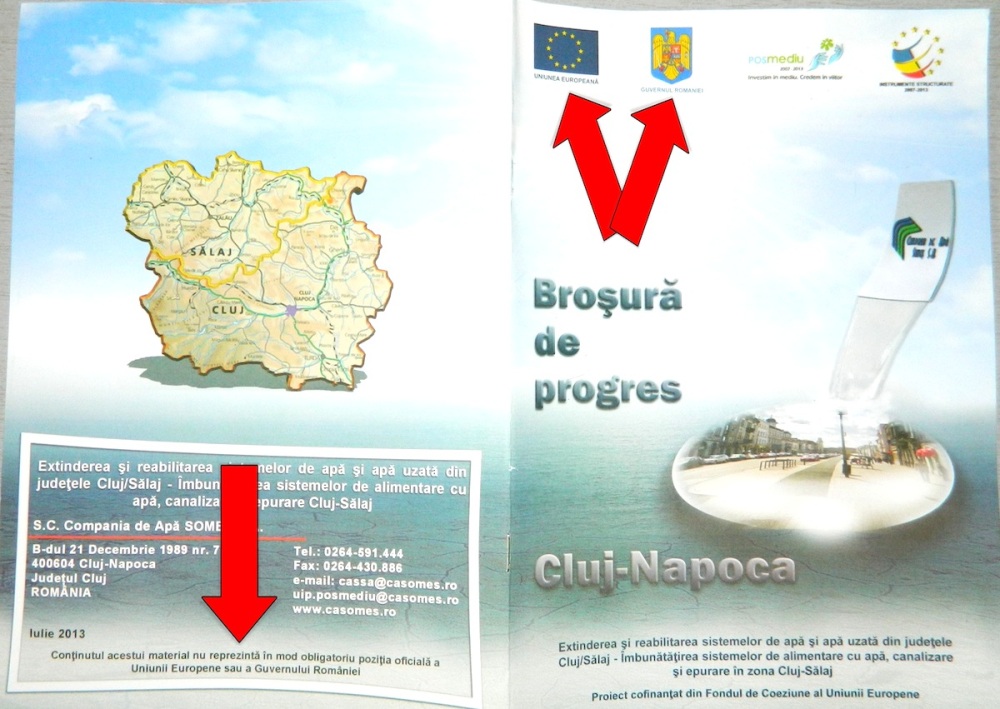 Does it get any more hilarious than that? I love it. God knows how some dry statistics about the great Salaj-Cluj water treatment facility might somehow veer from the “official position” of the government.

Of course, as I’ve written about before, I’ve met and spoken with David Ciceo, the little mouse of a man who is in charge of the airport. He styles himself as a “doctor” because he has a degree in “management and economic engineering”, whatever that means.

Sadly, his doctoral thesis is online and in English here (PDF), complete with such genius-level statements as:

Through its specificity, this is a management research with a clear focus on the field of airports…

…for the last part of this paper, quantitative analysis methods were used in order to improve the performances [sic] of Cluj “Avram Iancu” International Airport in the section that could currently generates disturbances in the passenger’s flow [sic] traveling through the departure terminal.

Even if his English wasn’t so laughably bad, I don’t think there’s any problem with “the passenger’s flow” in his half-empty ghost of an airport.

And once TAROM gets chopped up and sold (at the IMF’s request) later this year, there will be plenty of space for the gypsies camped out at the nearby Pata Rat garbage dump (another one of Emil Boc’s dirty secrets) to set up their tents in the departures hall without disturbing the “flow” of the last remaining passengers.

Even though his airport sucks, I decided to write Mr. Ciceo a little poem to cheer him up.

A Poem for David Ciceo

Slow and low,
that is the tempo
of the passenger’s flow.

After all, it isn’t very fast
to drive to Cluj from Budapest
or Targu Mures.

So I really don’t care
if you have to pay a higher fare
after we chased away Wizz Air!