After all the research lately into taxes, politics and business, I thought it was time for an unequivocally positive story from around these parts.

Last weekend here in Unicorn City was the first Transylvania Book Fair (link to Romanian news article about it here). There are a couple of other book fairs which come to this city but this was the first one dedicated exclusively to authors and publishers from this region.

Although I missed his performance at the book fair, the incomparable Nucu Pandrea played his unique music. I met this guy during my book launch back on December 1 and he completely blew me away.

As far as I am aware, he’s the only person in this country who plays music with a leaf, as in he puts an ordinary leaf from a bush between his lips and somehow makes music with it. I had a long chat with this guy during my book launch and he told me it’s an old custom from shepherds, a way to pass the long, lonely hours while up in the hills with their flocks. This guy is just incredibly cool and if you ever get a chance to see him play, you should.

Here’s a video from YouTube I found where you can see him accompanying Schubert. Amazing!

I actually filmed my book launch, including the part where Nucu Pandrea played music, so one of these days I’ve got to post it online so everyone can see it. 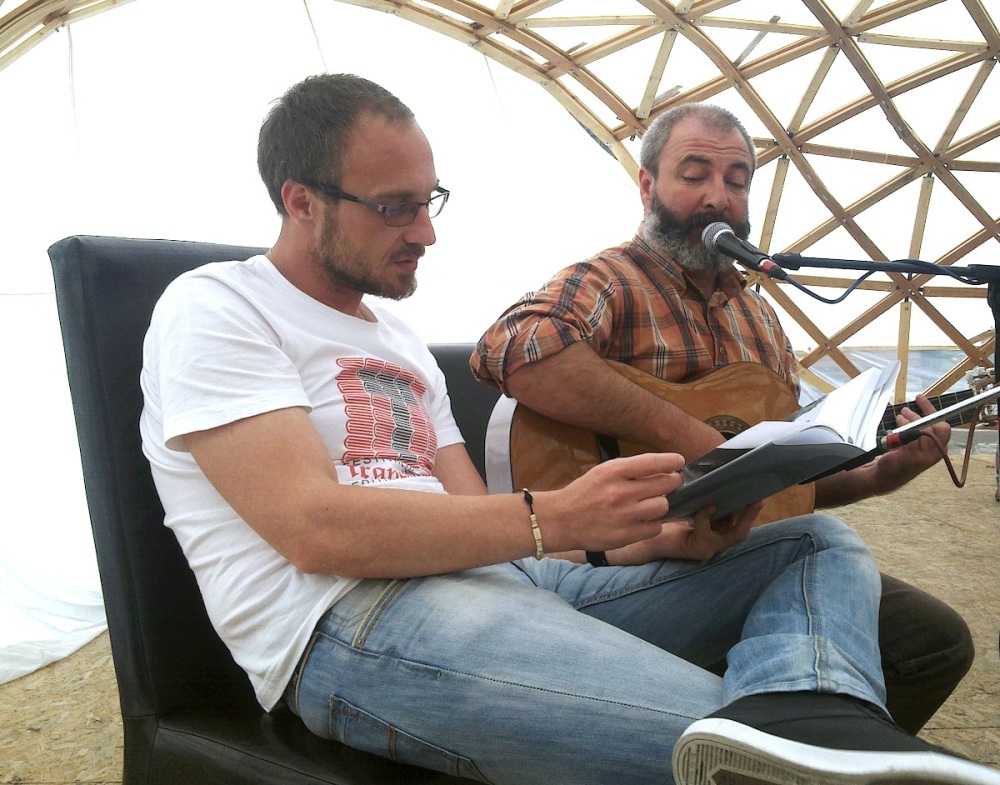 While I missed most of the music, on Sunday during the book fair I was down in the center pavilion with a couple of guys from Editura Eikon, the publishers of my awesome book here in Romania.

I gave a little speech and answered a few questions but the highlight of the day was when it started to rain. We were all inside a little pavilion in Piata Unirii (the central square here in Cluj) and the man you see on the right cracked open a two-liter bottle of homemade tuica.

He then unslung his guitar and began telling wonderful stories and singing songs. At one point (pictured above) he was playing softly in the background while the man on the left was reading aloud poems from a book from a local author.

So there we were, warm and dry in the pavilion while outside there was cold rain, with a gentle heat in our blood and minds from the tuica, while one guy played the guitar and the other read poetry aloud. Fantastic! It’s really moments like these when I know (once again) why I live here.

I am so blessed to be able to understand the language and be able to sit there and just drink it all in, listening to melodious words and music that move you, all of it a sweet tribute to art and literature and everything that is good and beautiful in this world.

From what I was told, the book fair went off quite well (despite persistent showers over the entire weekend) and so it looks like next year there will be a sequel.

Definitely looking forward to it!