Last weekend, my wife and I decided to go visit Transnistria. Although I’ve been living in Moldova for a few years now, I just never found the time to go. While we had no idea what to expect, we were really pleased by our visit to this country.

After our first bus suffered some kind of electrical problem, the ride to Transnistria was smooth and uneventful. However, the Russian lady perched in the seat next to the driver continued to do a hell of a lot of talking in a loud voice. We quickly realized that she was just crazy. 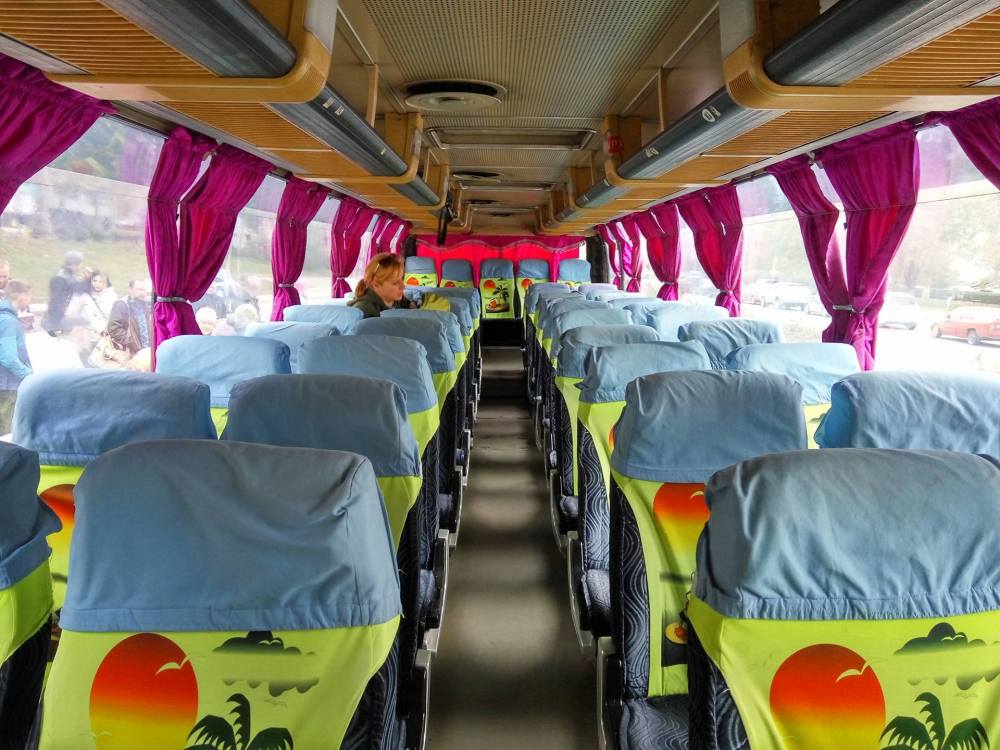 It was because the earlier breakdown of the bus had put off schedule that she insisted on herding us through the Migration office as quickly as possible. Within 15 minutes, we were all stamped and approved to enter (minus a few Moldovans who had just flimsy paper IDs and no passport) and rolling on into Bender.

We didn’t get off the bus in Bender, but we were immediately impressed by the graceful streets, the lovely greenery, and the general orderliness of the city. Chisinau is continually in a degraded condition, so it was pleasantly odd to see painted crosswalks, smooth sidewalks, and streets with no potholes.

We also immediately noticed that everything had turned to Cyrillic.

Tiraspol is just about a 10-minute drive from Bender, so it wasn’t long before we were able to get out and start exploring Transnistria.

The first happy surprise after buying some rubles (we used Moldovan lei but you can also use other major currencies, including yes, the US dollar) was seeing that the writing was in three languages:

If you look at the third line from the top, you’ll see that although it is written using the Cyrillic alphabet, it’s in the Romanian language (Banca Nationala Nistreana). Yep.

The first thing people don’t realize about Transnistria is that there are three official languages: Russian, Ukrainian, and Romanian. They call it Moldovan, however, most of the time.

Having long wanted to visit Tiraspol, I knew right where to go. We had deliberately chosen to go to Tiraspol on the occasion of their hram or official City Day festival. As you’ll see, Tiraspol was celebrating 225 years since its founding.

First stop, though, was the Sheriff!

Honestly? I’ve been dreaming of visiting the Sheriff for about 10 years now. The entire company’s history is very unusual, to say the least.

The short version is that it is the Amazon of Transnistria. Anything you need, and I do mean almost anything, is for sale by the Sheriff. They own roughly 90% of the entire private sector of the country’s economy.

But what few people realize about the Sheriff is that they actually do a hell of a good job. Their stores are extremely nice and the prices are good. The branding too, is fabulous.

To wit, here’s the Sheriff’s official logo. To my mind, it looked exactly like an American “Old West” style Sheriff’s badge.

But my wife insightfully pointed out that it’s actually a twist on the classic Communist red star.

Inside, I was a little disappointed to see a lot of the same goods as you can find here in Chisinau.

But upon second inspection, I realized that the Sheriff’s prices were astoundingly good. I happily scooped up several boxes of my favorite tea before deciding to include this as one of my favorite souvenirs:

I also saw more evidence of The Sheriff’s superior branding. Look at how amazing the bottle design is for their “Gatorade” style drink.

I’ve been using bland old Moldovan money for so long that it was a thrill to have some new money to handle. Transnistrian money is nowhere as good as Romanian money (honestly, only a few country’s currencies are) but it’s all right.

In fact, here’s a collection of every kind of paper ruble you can get:

As you can see, some of the colors blend too much into one another, and there’s far too many pictures of Suvorov. Time to add some new men and women to your money, bro!

What can I say? This article (in Romanian but with tons of pictures) was 100% right. Tiraspol’s central market is better in every single way.

It’s beautiful, it’s uncrowded, there’s nobody shouting, spitting, or shoving, and yet you still get a full range of amazing fresh goods, all at prices better than in Chisinau. And, to boot, the entire market is painted lovely shades of green.

Oh, and a hot tea to chase away the chilly weather cost 3 rubles. I truly died and went to heaven.

Oh shit, and they even have their own website (in Russian) that’s actually up to date. They also have maps. There’s a clean and nice public toilet that’s free to use. Plus free parking for cars and ample bicycle racks.

I give Tiraspol 5 million gold stars for their awesome central market.

Rage Against the Machine

After that, it was time to visit the main attraction. Tiraspol was celebrating its 225th anniversary as a fortress city built by General Suvorov to keep out the Turks.

Following the festive music, we easily navigated to the heart of the party. The main street, October 25 was closed off to motor vehicle traffic. Walking down the ample, and I do mean ample street really impressed me once again with how the Soviets thought big.

As such, I was expecting a pretty big statue for General Suvorov, the guy who founded the city. Visiting Suvorov’s statue was number three on my list of things to do in Tiraspol, so we made a beeline there.

To be completely honest, I was a little underwhelmed. It wasn’t exactly small or anything, but it wasn’t quite as imposing as I had imagined. Nonetheless, it’s a pretty impressive statue as most horse + guy statues usually are.

Through sheer coincidence or cosmic karma, the moment we got to the base of the Suvorov statue, the festival DJ put on a new song, and I nearly shit my pants.

I swear to god, this is what they were playing:

Therefore, for a couple of minutes, my wife and I got to mosh out while screaming “Fuck you!” at the top of our voices.

I have to admit, that was really fun and very therapeutic.

My wife was seriously tripping out with all the Romanian we kept seeing written in the Cyrillic alphabet. I have to admit it was not what I expected either, but then you have to remember the kind of guy I am.

Since I first became More Romanian Than You!, nothing causes my heart to pitter-patter like discovering another lost tribe of Romanians. Of course, nobody there was lost, but they’re so far under everyone’s radar (in the Romanian world) that it certainly feels like a lost tribe.

All I can say is that the Moldovans in Transnistria did a great job of representing.

By the time we made it down to the Moldovan folk dancing, we were feeling nice and warm on the inside thanks to some really nice wine. For an average price of 6 rubles a (plastic) glass, we sampled both Transnistrian and Gaugauzian wine. I must say that all of them were quite delicious.

I give Tiraspol’s City Days festival 5 golden stars for the wine.

During just a few hours, we accomplished four out of five of my goals, and we had a really great time at the festival. The wine was delicious, the Romanian stuff was great, and everybody that we spoke to or interacted with was incredibly nice.

It was even evident from the people walking down the street that Tiraspol-ians are far more relaxed than people are in Chisinau. People in Tiraspol were courteous, kind, and polite. Even when we accidentally cockblocked a guy from taking a selfie in front of the 225 TIRASPOL sign, he didn’t get angry.

The architecture was phenomenal, and the streets were both spacious and well shaded with trees. We saw a few cops on foot, but not a single police car, and there were certainly no soldiers/cops with machine guns like we saw in Chisinau during Wine Days.

Also, we didn’t see a single Communist symbol in the entire town except for on the monuments and a couple of governmental buildings. Yes, the entire town was draped in regalia for the big festival, but all of it focused strictly on non-Communist symbols like the country and city’s flags. We also saw some amazing, completely non-political street art and murals.

I’ve got literally zero complaints about Transnistria. Nobody ever tried to stop us from taking photos, and nobody even looked annoyed that we were doing so. We saw happy seniors, happy couples, teenagers messing around and having fun, families with little kids, and everyone was having a good time.

The Central Market is freaking amazing, and the public buses we saw were quite modern, painted a cheerful yellow that we liked a lot.

I honestly can’t wait to visit another time, especially to meet some of the Romanians who live there.

Tiraspol? You are officially a toddling town.

When you enter Transnistria, you’ll need to show your passport and declare what kind of visa you want.

For a day trip, you get 10 hours in the country. If you want to stay overnight, you’ll need to show proof of a hotel booking. If you go for a day trip and miss the last bus, go to a hotel and they’ll help you get the right paper so you can leave without incident.

You can exchange dollars, euros, Ukrainian hryvna, Russian rubles, and Moldovan lei for PMR rubles just about anywhere in Tiraspol. Prices are often marked with a lowercase “p.” (Cyrillic for the letter “r” as in rubles).

Upon leaving Transnistria, all you’ll need to do at the border is show them your passport and the visa paper, a process that takes about three seconds. You’ll get to keep your visa as a souvenir. Once you get back into the Republic of Moldova, there’s no passport control or anythin, but occasionally, your vehicle might get flagged over for a quick inspection.

AND NOW YOU KNOW ABOUT OUR LOVELY DAY IN TIRASPOL!