I’m always looking out for the perfect article to describe Romania and this is it, courtesy of Gandul.

Back in January of this year, it snowed. Considering that we’re in the northern hemisphere and that January is in the middle of winter, snowfalls are quite ordinary. It snowed particularly hard in Romania’s southeast, especially in and around Braila, which it has every single year that I’ve been living in this country.

Nonetheless, because this snow was “unprecedented”, the national government has decided now, in April, to send a few counties (judete) a “few tons” of gasoline and diesel fuel in order to “make up for” the fuel they used to combat the snow. Yes, that’s right. It’s no April Fool’s joke. Three months after the snow fell, the government is “compensating” the hard-hit counties with fuel drawn from the national strategic reserves.

The first thing to understand about this farce is the election angle. Most of the counties that will be receiving the fuel have governments (and “baron” politicians) that are closely allied with Prime Minister Victor Ponta’s PSD party.

The theory here is that elections are coming up in May (for the europarliament) and since the national government is flat broke, Ponta is scrambling for a way to give material support to his allies. Since the gasoline and diesel is already on hand in the country’s strategic reserves, sending some of it to the southeast costs (virtually) nothing.

The second part of this is the supposed justification for why these counties need the fuel. Firstly, they alleged expended hundreds of tons of “extra” fuel this winter to combat the snow. Even if this were true, it shows just how poorly the budgets are managed in counties which receive abundant snowfalls every single year.

As with just about everything in this country, each county’s budget is determined by Bucharest. The counties then have to divide this pie as best as they can, including setting aside monies for snow removal in winter. Some county administrators profit handsomely by having their own companies get the contract to remove the snow while other county administrators simply fail to allocate enough money for snow removal. Regardless, the central government in Bucharest decides each county’s budget.

The county administrators, while pleading for this “necessary” fuel from the national strategic reserves, have said it’s an issue of national defense. Yep, they’re saying that without more fuel on hand, the Romanian defense department cannot adequately carry out its duties in the respective counties.

If this is true, it means that this country’s military is dependent on county-level politicians to manage their fuel, which reminds me of the Berbeceanu case, in which an elite anti-corruption law enforcement agent had to request fuel for a raid ahead of time, an absurd procedure. Apparently the military’s fuel needs are fulfilled in an equally ridiculous manner.

The third part of this farce is how this law got passed to provide “compensatory” fuel to the counties in the first place. Unlike most of the laws passed in Ponta’s government, this one was not done as part of an “emergency” governmental ordinance. It was put on the floor, “studied” and voted on for a grand total of five whole minutes.

How can that be? Well there’s some clues hidden in the procedure which will tell you how it was done. First, a few opposition local politicians are also going to benefit. Secondly, it took three months to craft this piece of legislation when obviously fuel expenditure was a known piece of data from the start. Third, the bill was introduced and passed in five minutes, which is record speed for the Romanian (or any) parliament, so those three facts combined tell you that this entire thing was hammered out “behind closed doors” after long negotiations.

The fourth part of this farce is the number of criminals involved in negotiating and crafting this piece of legislation. It includes a number of county governors who have open criminal cases as well as consultations with former Defense Minister Corneliu Dobritoiu, who was forced from his position after a number of scandals, including abuse of office. But despite that, he still serves on the commission which determined that the counties had a “strategic need” for this fuel.

And the fifth and final piece to this farce is the fact that the amount of fuel that the government is going to send to the counties is unspecified. Even though the counties know how much fuel they used for snow removal, somehow they have been unable to specify how much “extra” fuel that they need to be compensated for and the new law leaves the amount open-ended, which means it is subject to (the inevitable) abuse by corrupt politicians. 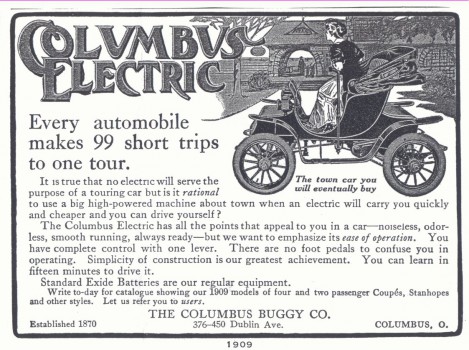 The sad part is, as I mentioned in my article Loony Gas, that there’s no need for Romania to be dependent on petroleum at all. Instead of people being poisoned for decades, this country could’ve been allowed to develop more harmoniously (with less pollution) using other technologies.

A case in point is the ad above, which is hard to read but comes to us from the year 1909. It’s an advertisement for an electric-powered automobile. Yet here we are, over 100 years later, and electric vehicles are extremely expensive and rare.

In all my years of living in Romania, I’ve only seen a single (entirely) electric car, a show model brought in from Budapest that was a kind of glorified golf cart and not a proper automobile. I’ve never seen an electric scooter or motorcycle either, despite the fact that they’re cheaper than a car (to buy) and sold in Europe (Yamaha has an excellent model). I’ve only seen one or two electric-assist bicycles but strangely there is one guy here in Cluj who I see every summer zooming around on a Segway.

The “Columbus Electric Buggy” was actually built, as you can see in the photo above. It was cleaner, quieter and more efficient than gasoline-powered vehicles and yet we all know how the course of history was instead commandeered by petroleum megacompanies.

Think about it – we could all be driving electric vehicles today but instead the entire economy is based on petroleum-fueled transportation, so much so that a recent hike in the excise tax (at the explicit demand of the IMF) is expected to cause widespread misery and price hikes.

I sometimes feel like a time traveler sent to the past, marveling at the primitive technology of our forebears when I see my streets clogged with these loathsome, polluting, noisy petroleum-powered vehicles. They are hideously inefficient and their fuel requires a tremendous amount of time, energy and money to get the petroleum extracted and then distilled into a usable form. Much of the petroleum is imported from despotic countries like Saudi Arabia, where no one is allowed to vote, and the profits go to dictatorships like Azerbaijan and Kazakhstan (which owns 100% of PETROM).

Diesel (motorina) engines were originally designed to be run on vegetable oil, not petroleum products. With just a little filtering, any diesel-powered vehicle can be operated entirely on vegetable oil, including the waste oil created by thousands of restaurants and fast-food outlets frying potatoes and other foods. People in America have already driven from one side of the country to the other at zero expense, using only waste vegetable oil to power their vehicle.

Even normal gasoline-powered vehicles can, with a few minor modifications, run entirely on alcohol, a substance that Romanians are quite adept at producing. Cars don’t even necessarily need ethanol (drinking alcohol) but can also run on methanol, a form of alcohol made out of wood. Think of the enormous forests covering Romania and you’ll instantly realize that this country has all the transportation fuel it needs.

Not only that, but gasoline-powered cars can be powered by burning wood. I once knew a guy who took two metal barrels, burned wood in them and thus powered a generator (that was normally powered with gasoline) that created enough electricity for his entire house. That’s not a viable solution for the entire country, of course, but I’m surprised no thrifty Romanian villager has ever tried something similar.

Electricity isn’t free, of course, and is largely produced in Romania by burning coal or via nuclear fission. That being said, there are earth-friendly ways to produce electricity, whether it’s wind power, tidal power, hydro (waterfalls, dams, rivers, etc), geothermal and solar.

Of course it’s one thing to wait for the government to build some enormous renewable energy plant but it’s far easier to build a small one yourself. The guy at the link cobbled together his own little windmill and created enough electricity to have charged his car (if he had owned one – instead he used it mostly to power his computer and other things). For a total of $140 he could conceivably be driving around town without ever having to pay another penny for fuel.

Obviously these concepts have no traction in Romania where everyone is hell bent on creating more roads for petroleum-powered vehicles and not even taxis (which make multiple in-town short trips) are electric. But with a little foresight and planning, even the most corrupt county administrator could be operating his snowplows without using a drop of petroleum.

But without all the shenanigans, lies, double-dealing, bullshit laws, stupid politicians, payoffs, corruption and inefficiencies, Romania wouldn’t half as fun a place to live, would it?

Hey, hey, Victor Ponta, I wrote you a song:

In my country there is problem,
and the problem is the politician!

They take everybody’s money
and they never give it back.

Throw the politician down the well
so my country can be free!

You must grab him by his horns
and we’ll have a big party.

If you see the politician coming,
you must be careful of his teeth.
You must grab him by his money
and I’ll tell you what to do:

Throw the politician down the well!

5 thoughts on “Throw Transport down the well!”