A couple of weeks ago, I read a very interesting book written by Paul Schmidt, a man who was very gifted with languages and served for more than 20 years as an interpreter and translator for the German Foreign Ministry.

Unfortunately, because my German is a little rusty, I had to read the English-language version of the book, which does not include Schmidt’s work in the 1920s and early 1930s before the rise of Hitler.

Schmidt was apparently an extremely skilled interpreter and note taker, so much so that many of the most important figures from Italy, France, and Britain who met with Hitler and Nazi officials during this time did not bring their own translators, relying exclusively on Schmidt both to interpret during the meetings as well as type up the transcript reports afterward.

Schmidt was the proverbial “fly on the wall” at some of the most seminal events of World War 2, including the Munich Peace Conference (that divided Czechoslovakia) and the surrender of France.

It’s a very interesting book, and I recommend that you read it.

However, today we’re going to focus only on the interactions between Hitler and Ion Antonescu, Romania’s fascist leader during World War 2, which form just a very, very small part of Schmidt’s book.

It should be noted that, as gifted a linguist as Schmidt was, he did not speak Romanian. He did speak French, however, which is what he used in ALL of his interactions with Antonescu as Antonescu was completely fluent in French (but couldn’t speak German).

I’ll be sharing some screenshots from Schmidt’s book in this article, but keep in mind that you’re reading an English translation of a book written in German about conversations that took place in French with native speakers of Romanian.

In other words, some of this surely got “lost in translation.”

World War 2 officially began on September 1, 1939, with the German incursion into Poland.

A few months later, although not a shot had been fired on Romanian territory, Romania, a staunch Nazi ally, was already suffering greatly.

First, the secret Soviet-Nazi agreement “permitted” the Soviet Union to take both Bessarabia (more or less what is now the Republic of Moldova) as well as Bucovina (now in Ukraine).

Secondly, the Hungarians saw this quiet acquiescence of their territory as a tacit admission that Romania did not give a shit about its borders, and so they convinced the Germans to “award” them Transylvania in a sham arbitration hearing.

Third, the Bulgarians (also fascist allies of Nazi Germany) got the fascists to “award” them southern Dobruja.

Therefore, by the end of 1940, Romania had lost massive chunks of its former territory, again without a single bullet being fired. 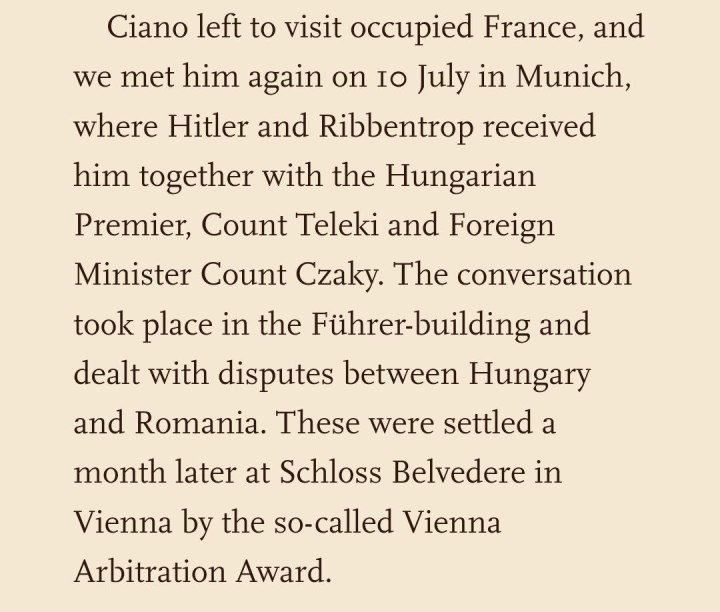 Note: Ciano was Italy’s foreign minister at this time. Without getting too sidetracked, it’s worth noting that Italy had always been opposed to attacking the Soviet Union as well as the Nazi-Soviet non-aggression pact.

The man on the right wearing the light-colored uniform in the photo above is the Romanian Foreign Minister, Mihail Manoilescu.

I really do believe that he fainted when learning that Transylvania had been “awarded” to Germany because he was such a staunch believer in Greater Romania.

Furthermore, Ion Antonescu himself was also fanatically devoted to expanding Romanian territory all the way to the Don River in Russia (as I’ve documented before), so how exactly he reconciled his alliance with the Nazis and such egregious loss of Romanian territory is beyond my powers to understand.

Perhaps because Antonescu knew (as we shall see below) that he still had a chance to change Hitler’s mind.

Poor old Manoilescu, however, had been backing the wrong horses (Mussolini and Romania’s monarchy) since the beginning and died a miserable death just a couple of years later.

“Fun” fact: The place where Manoilescu fainted was the Belvedere Palace (or “Schloss”) in Vienna, Austria. In 1974, the increasingly fascist Nicolae Ceausescu renamed the city of Cluj in Romania to Cluj-Napoca and changed the name of the city’s most prominent hotel to “Hotel Belvedere” as a giant fuck you to the region’s Hungarian inhabitants.

The Fine Line Between Cunning and Crazy

Despite this enormous loss of territory in 1940, Antonescu remained unwavering in his commitment to Hitler. 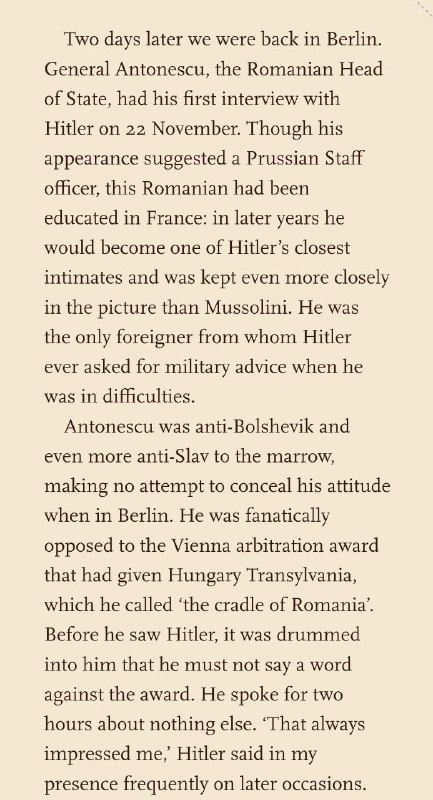 And here’s what the New York Times had to say about it: 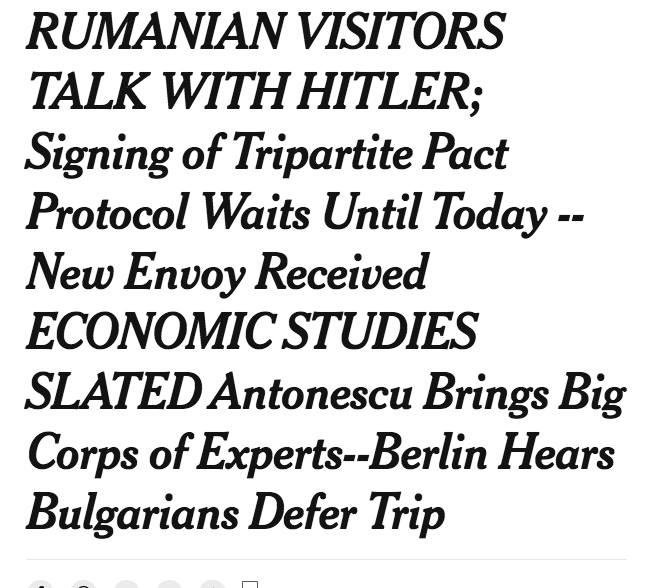 I’ve read a lot of history in my life, and I can honestly say that this is one of the most shocking things I’ve ever seen.

In 1940, Hitler was an unstoppable juggernaut.

His armies were spreading across Europe, and the Nazis had yet to lose even a single battle.

In fact, on the European continent, only Britain and Norway were not yet conquered or in the hands of Hitler’s allies, and Norway was soon to fall.

So who was Antonescu to stand up to Hitler?

Furthermore, Hitler had clearly authorized both the Soviet Union’s grab of Bessarabia AND the two cessations of land to Hungary and Bulgary, so how in the world did Antonescu have the guts to challenge him?

And last but not least, everyone at that point knew that Hitler wanted Romania’s petroleum resources, so what was to stop him from replacing Antonescu or invading Romania to just take them, if Romania didn’t behave?

As much as I loathe and hate Antonescu, I have to doff my cap for this extraordinary act of bravery.

Frankly, Antonescu did what no other foreign leader ever did, not the British, not the French, not the Americans, and not even the Soviets – stand up to to Hitler.

Furthermore, thanks to the way that the Nazi party itself had been set up, none of Hitler’s ministers or officers ever contradicted him either.  Albert Speer, in his final statement at Nurenburg, basically said that the Nazi party was nothing but “yes men” all the way down to the lowest ranks.

Therefore, it is quite possible that Ion Antonescu is literally the only person with whom Hitler ever spoke that had the guts to argue with him.

No wonder Hitler liked Antonescu so much!

The 1939 Molotov-Ribbentrop Agreement and its secret clauses definitely included tacit Nazi permission for the Soviet Union to (re)annex Bessarabia.

However, absolutely nobody expected the Soviets to take Bucovina, which had always been part of Romania. Bucovina had never once been part of Russia, and there weren’t even that many Slavic people living there.

Even Hitler was perpetually puzzled about it:

My Russian language skills being less than optimal, I doubt I’ll ever be able to flesh out exactly what the hell happened.

But what I do know is that the man who made it happen was Nikita Kruschev, who later became the head of the Soviet Union, the most powerful man in Soviet Ukraine during World War 2.

Technically an “ethnic Ukrainian,” Nikita Khruschev was a hugely ambitious man. And while I don’t know why he wanted Bucovina, I have seen the speech that he gave in Lvov (various spellings, including Lviv, and Lwow) when the Soviets took it.

Just like Bucovina, Lvov was another piece of “newly acquired” Ukrainian territory that didn’t exactly have too many Ukrainians/Russians living there and had never been part of Imperial Russia.

My best guess (and it’s only a guess) is that Khruschev was making all these territory grabs as a way to increase his political standing.  He was already the leader of one of the Soviet Union’s most important republics, and he wanted to become the supreme leader of the whole country.

If that’s the case, then it worked.

And if it’s true that Bucovina was annexed purely at the whim of Nikita Khruschev’s politial ambitions, then why has Romania never made a claim to get it back?

Instead, the Romanian government is always on its knees, thanking Ukraine for seizing Romanian territory while begging them to destroy the Moldovan language.

Antonescu might’ve had some Big Dick Energy to him, but he was also a bit of a bore: 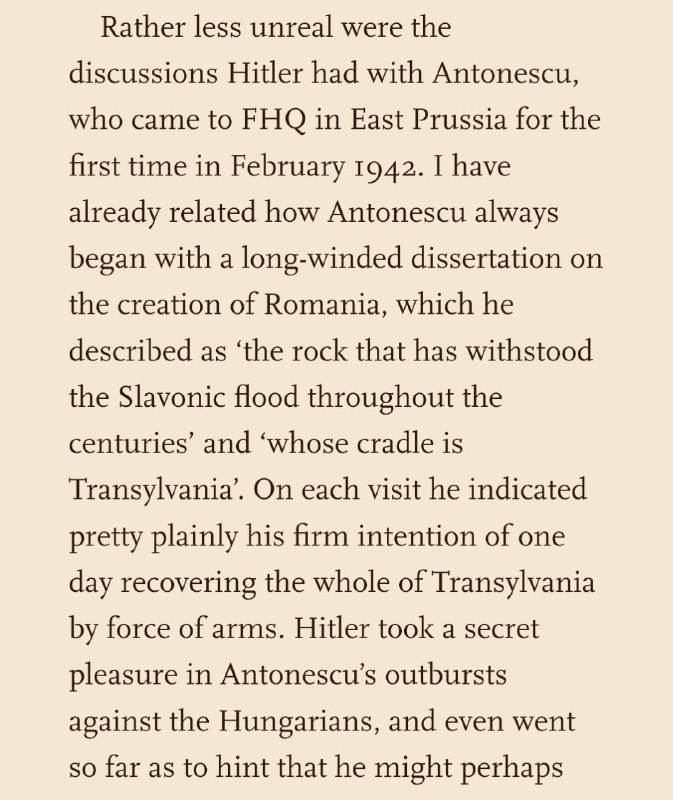 Hitler appreciated Antonescu’s “integrity” on the issues, but nobody wants to listen to a long-winded diatribe on a subject that you don’t give a shit about.

Furthermore, Hitler was not known for his patience even when people were speaking German to him, much less French, so it’s more than a little weird that he sat through Antonescu’s jeremiads.

On the other hand, Hitler had a whole list of “peoples” he hated (beyond Jews, Slavs, and Gypsies), including the Czechs and Hungarians.  Hitler was clearly laughing his ass off listening to Antonescu go to town on the Magyars.

Frankly, the whole scene is incredibly juvenile, and it is horrific to know that these two dipshits were deciding the fates of millions of people with these antics. 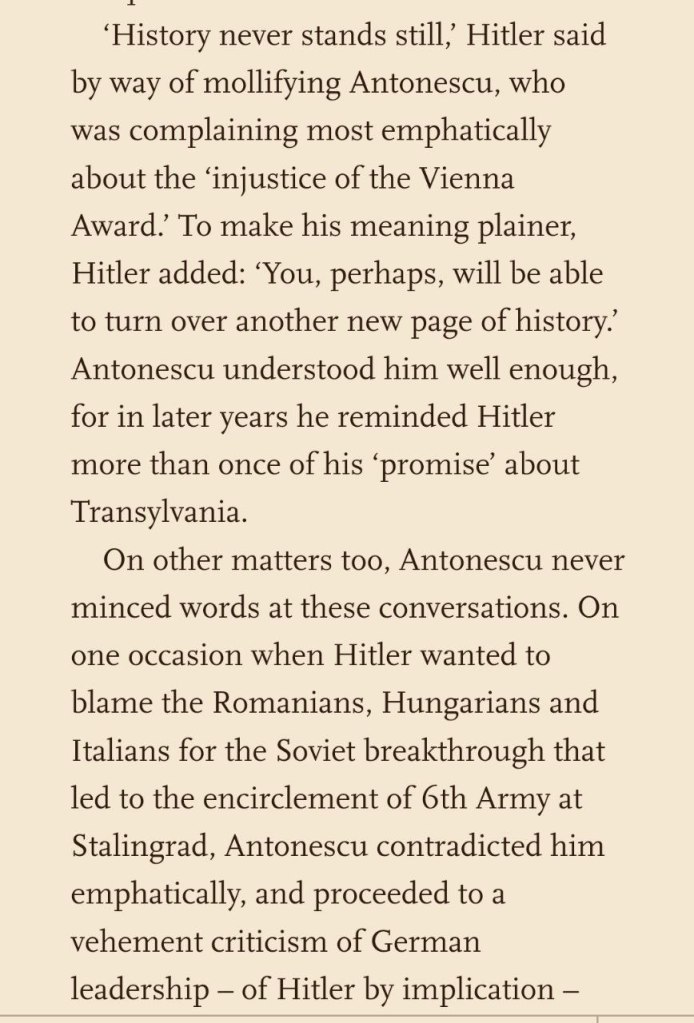 That last part, where Antonescu (who considered himself a master military tactician) was bitching about Hitler’s military tactics at Stalingrad, seems almost suicidally reckless.

But by 1944, Hitler was a depressed, extremely pale wreck, crippled with frequent anxiety attacks and non-stop farting, so maybe he was too weak to lambaste Antonescu.

Either way, you get the sense that Antonescu was ready to step in as the Axis Powers Supreme Commander if Hitler had wanted him for the job.

Antonescu’s balls-out attitude ended up paying off big-time when it came to the “tee-hee” naughty act of launching a full-scale assault on the Soviet Union in 1941: 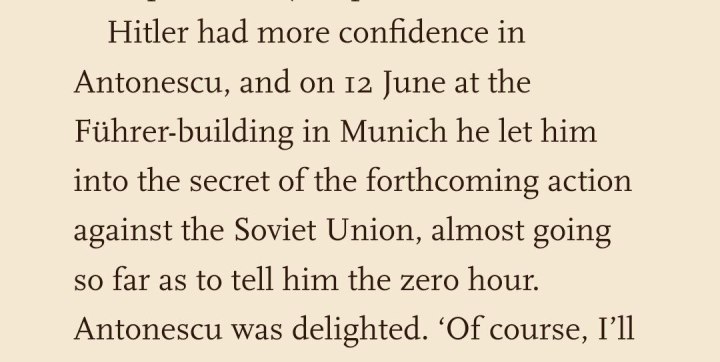 As you can see, Antonescu was frothing-at-the-mouth full of hatred of Slavs.

It’s a little bit odd because, during World War 1, Antonescu had fought valiantly as a cavalry officer and knew that Russians gave their lives to protect Romania.

Furthermore, Antonescu had long been an ardent monarchist, and the Romanian Prince Carol had come within a whisker of marrying into the Russian royal family.

However, Antonescu’s madness began after World War 1 when Prince Carol began cheating on his (Greek-Danish) wife with a Jewish woman that led to Carol being disinherited from the royal succession.

This was, ironically, nearly the same thing that Antonescu’s own father had done, i.e. flagrantly cheat on his wife with a Jewish woman and then later run away with her.

Some kind of fascist circuit fried in Antonescu’s brain when Prince Carol got disinherited, and it coalesced into a whacko theory that Jews and Communists and Slavs were in league together to destroy good old-fashioned Christian and Romanian values.

Or maybe what Antonescu said was true, that most Romanians (and not just him) really were racist assholes who just generally hated everyone who wasn’t Romanian.

Whatever the reason, that Yee-Haw Let’s Kill Some Slavs, Boys! attitude got at least 158,000 Romanians killed in the stupidest battle of World War 2.

All Forces Against East

Bizarrely, even after the Nazis and Romanians lost the Battle of Stalingrad, Antonescu was still ready to amp up the war against them no good Slavs.

And then finally, we get this:

The Soviet Union had to fight long and hard to eject the Nazis from Crimea. I once saw a Russian documentary about it.

However, it is interesting that there were no Romanian troops involved in that fight, so once again Antonescu is (essentially) telling Hitler what to do.

As even Schmidt has to admit (hey, that rhymes!), Antonescu really does seem like the only person in Hitler’s life who ever stood up to him.

Schmidt concludes by saying Antonescu “found the right technique for dealing with dictators” which is true, as long as we keep in mind that Antonescu was also a dictator.

And now you know about Hitler’s BFF!