Well, after a lot of crazy shit like fake Facebook and Instagram accounts,accusations of attempted murder by mercury poisoning, and dire warnings about violence from the U.S. Embassy in Chisinau, the parliamentary elections went off yesterday in Moldova more or less without a hitch.

Even the OSCE basically agreed that the elections were free and fair, although there were hundreds of violations, including people campaigning on voting day, et cetera. 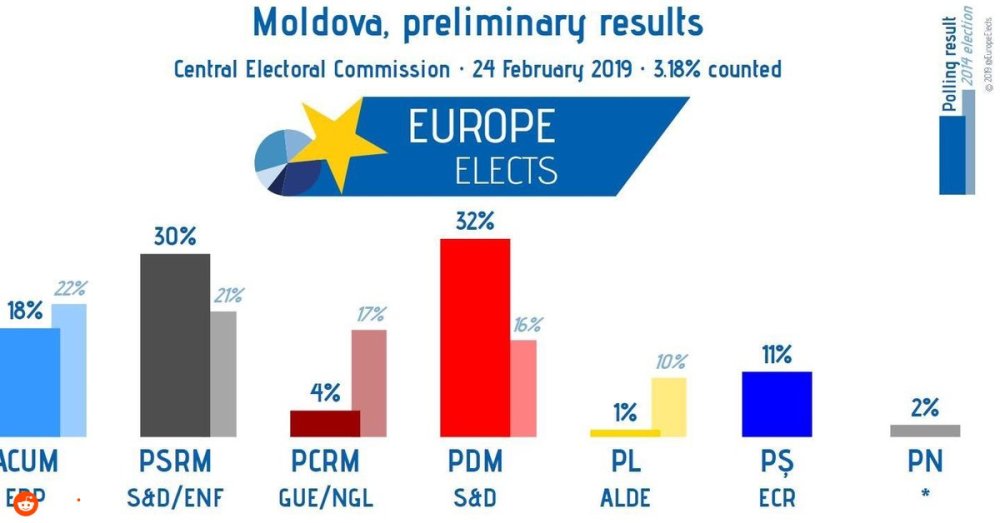 Just as predicted, the Socialists came in first with 32% of the vote. ACUM got around 26% of the vote, and Plahotniuc’s party is down to just under 24% (official results here).

Since all three of these factions don’t get along, it’s highly unlikely that they’ll be able to form a coalition. But it’s way too early for anyone to know what will shake out.

Crazy Maia Sandu (and I truly do believe this woman has mental problems) is saying, however, that these were the “most unfree and most undemocratic” elections in Moldova’s history, which is pretty much bonkers and out of line with what even her foreign backers (the government of Romania, the US Embassy, USAID, Embassy of Sweden, et al) are saying. She’s promised “lots of protests,” but we’ll see. Most of her supporters have jobs, so I don’t know how much protesting they can actually do.

Therefore, everyone in “the West”, whether it’s Romania, the EU, the Economist, RFE/RL, Promo-Lex, or random weirdos on Twitter, is now quite upset about the Moldovan elections for one reason or another.

But, by far, the story that everyone’s talking about is the mysterious “ghost buses” that allegedly transported voters from Pridnestrovie (“Transnistria”) in exchange for payments of (it depends on the source) between $3 and $20 apiece.

Supposedly, there were hundreds of these buses, but no one managed to photograph or film any of them. Considering that approximately 35,000 people voted who live in PMR, we’re talking about at least 430 buses and at least $100,000 in bribe money.

Some say it was Plahotniuc who paid for and organized the ghost buses, but just 5% of the PMR voters voted for PDM (Plahotniuc’s party), so either that backfired spectacularly or else the rumors are wrong.

Other rumors are that Russia ordered PMR (what a laugh) to drive the buses and pay people to vote for the Socialists, which seems to me preposterous bordering on the fantastical. But all we’re left with is rumors, so it’s anybody’s guess as to what actually happened.

In the meantime, everybody and their brother is going to be speculating about what happened during this election and what is going to happen in the near future.

The only thing that we know for sure is that Western propaganda outlets will be required to refer to the Socialist Party as pro-Russian and ACUM as “pro-European” despite that being completely inadequate.

In reality, ACUM is “pro-Romanian language”, as in the (very political in these parts) belief that the language spoken in Moldova is Romanian and that the Russian language should never be used in any kind of official capacity. This is why pretty much all of Moldova’s academicians and intellects are fervent ACUM supporters.

The Socialists, meanwhile, ran on a campaign of multiethnic diversity and tolerance and a strongly “pro-Moldovan” platform that urges recognition for a separate Moldovan culture and language. They didn’t say one word about Russia except that they believe Moldova should join the Customs Union (which includes Russia, Kazakhstan, and Belarus), but they did say that they want Moldova to be a sovereign state without any military or political alliances.

So, take it as you want. I’m not going to bother unpacking the results any further because I doubt there’s a single person with an open mind reading this.