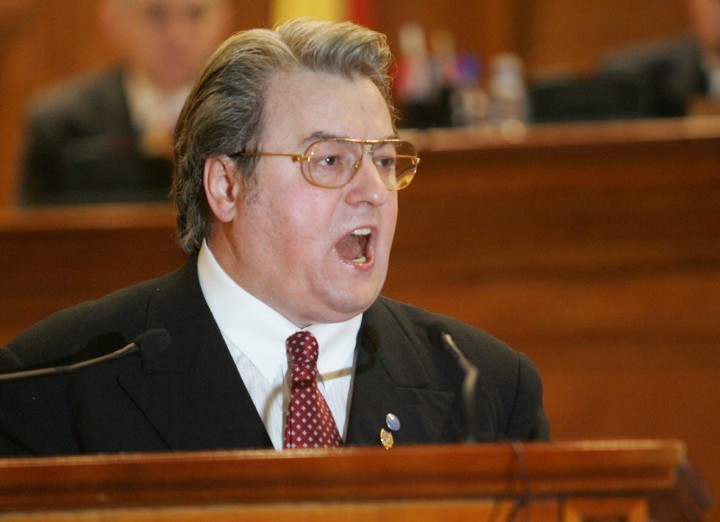 You know, one of the very first posts I ever wrote on this website was about Corneliu Vadim Tudor. At the time, I was mocking him for his crazy, racist antics and for being an all-around disgrace. But I realized today that I owe him an apology.

The picture above is how I remember him best. In 2007 I was living in a very small village and the only two TV channels we could receive (free via satellite) were Taraf (a manele music channel) and TVR2. This was during the time that Basescu was first suspended by the USL and good old CVT would appear nightly on the newscasts, railing and foaming at the mouth about Basescu, saying that he (Basescu) and his associates were mafioți și hoți (mafia members and thieves) and using absolutely the most incendiary language possible.

I often watched these nightly newscasts with an older lady and she absolutely loved CVT. When he would get up there on the podium and froth at the mouth, she would start jumping around in her seat, shouting and waving her fist right along with him. I, with my limited but growing Romanian skills, saw through the fascist rhetoric immediately. She on the other hand hung on every word he spoke and believed he was Romania’s “last chance” at salvation.

I also remember even earlier, when fellow PRM member Gheorge Funar, the psychopathic lunatic mayor of Cluj was busy doing his goddamn best to ruin this city. I can never forget the time that Funar dumped a bunch of horse meat on the desks of the Hungarian members of the city council (racists in Romania sometimes say Hungarian sounds like “horses talking”). I remember how this crew of populist pirates pirates, continuing in the footsteps of the Iron Guard with their unique blend of patriotism, machismo, mystical Christianity and old fashioned fascism, were hell-bent on claiming Romania for their own fiefdom and I swore I would never forget it.

CVT is now mostly out to pasture, although technically he’s a member of the Europarliament, but his party is weak and toothless these days. Their work is now being continued by the Noua Dreapta, fucktards that they are, who once tried to jam their homophobic rhetoric down my throat in Timisoara and despite the fact that there were 6 of them so “bravely” wearing their black shirts, they all ran away from me in terror (for some odd reason LOL). But where was I?

Ah, yes. CVT was once popular with a lot of people, including my nightly news “buddy”. And it was this popularity in 2004 which ended up being the reason that I owe him an apology. It’s hard to remember now but Adrian Nastase, head of the PSD, was at the height of his powers. He had just come off a four-year stint as Prime Minister, overseeing Romania’s joining NATO and signing the papers for a future accession to the EU. President Clinton had arrived to great fanfare under Nastase’s watch and his (Nastase’s) PSD party easily rivaled the combined political forces of both the PD (now PDL) and PNL parties.

And so it seemed almost inevitable that Nastase would win the 2004 presidential elections and continue in the steps of his mentor (and fellow PSD leader) and outgoing president Ion Iliescu. Facing Nastase were a host of candidates, including the surging former mayor of Bucharest (Traian Basescu) as well as many bit players such as the man ape Gigi Becali. Nastase was indeed the favorite to win and did win the first round. Unfortunately for him, he was unable to obtain 50% +1 of the votes, largely due to Corneliu Vadim Tudor, who won an astonishingly high 12.5% (or 1 in 8) of the votes. Had CVT not run and thrown his support to Nastase, it is inescapable that Nastase would’ve won and become the President of Romania in 2004.

But CVT did participate and did win 1.3 million votes and so forced a run-off election between Nastase and Basescu. Basescu narrowly won (51% to 49%) and became the president in 2004. It was just a short while later that the DNA first opened their case of the “Quality in Construction Trophy” against Nastase, for which he finally was convicted in 2012, a case that concerned fraudulent fundraising to finance Nastase’s 2004 campaign. By 2006, due to the DNA case and other factors, Nastase was ousted as head of the PSD and began his slow decline to end up where he is now, a sick, diabetic, ugly old man serving time behind bars after a pathetic attempt to stir up sympathy by faking a suicide attempt. Pitiful.

But what if Nastase had won in 2004? What if Nastase had become president, able to choose both the Chief Magistrate (top judge) of the ICCJ (highest criminal court) and the chief of the DNA (anti-corruption agency)? Do you think that these three major cases would’ve ever been filed against Nastase when he held the reigns of power and had immunity in his position as president anyway? Do you think the PSD and its soon to become allies in the PNL would’ve ever allowed such a thing? I doubt it. I doubt it a lot.

It’s easy to look at what Basescu did over the last eight years and judge, rightly or wrongly. It’s easy to look at the salary cuts and hikes in taxes and all the rest, right down to the agreements that got signed with the IMF and World Bank. But looking at the USL’s actions, particularly in light of the shocking document that came out yesterday, I can only wonder just how much worse it would’ve been had CVT not split the vote back in 2004 and prevented Nastase from winning the presidency in the first round.

I note that now Antonescu has more or less confirmed that the said document was indeed signed with the odious Dogaru but qualified it as saying it was not being “taken seriously” by the USL. But considering the swift reaction against Andrei Chilliman, I can’t believe a word Antonescu says.

Andrei Chiliman, an older and respected member of the PNL (part of the USL alliance) has long had a lock as mayor of Bucharest’s sector 1, wrote an open letter to Daniel Chitoiu asking (politely) what in the hell Chitoiu was doing pledging the PNL to such an insane list of demands that Dogaru had set forth in the document. Antonescu, who temporarily has to step aside as president of the PNL, fired back and said that the “leadership” of the PNL should remove Chiliman for daring to question it. That’s not the kind of reaction a person has when a document is supposedly just a meaningless sop to Dogaru and his merry band of military thugs.

Therefore, Corneliu Vadim Tudor, I owe you my sincerest apologies. You’re still a racist, stupid old clown who wrote shitty poetry in praise of Ceausescu but through a strange serendipity of fate, you ended up saving this beloved country from an even worse fate. Any time you’re in Cluj and in the mood for a beer, it’s on me.

12 thoughts on “My sincere apologies to Corneliu Vadim Tudor”