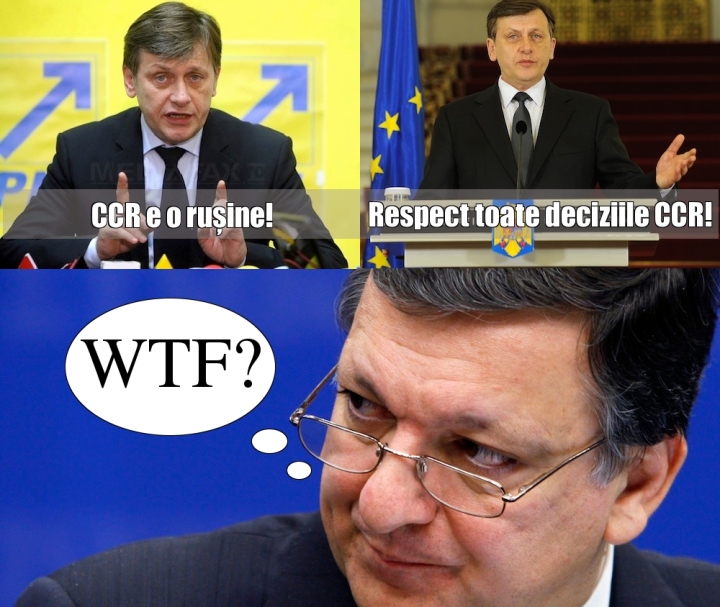 Oh lord! Well as I mentioned before, Ponta was given “11 commandments” by Barroso last week and was required to return a written response two days ago (Monday). By mid-day (see here), Ponta had failed to do so. Apparently some time late on Monday, Ponta transmitted the following document written in shamefully ignorant English.

There’s a PDF of this online but for your ease in reading it, I have typed it out. All underlined portions are NOT in the original but are my editing to show the mistakes (my commentary in brackets):

I would like to thank you for the open discussion we had on Thursday, 12 July 2012. [no comma necessary and it’s July 12, 2012] I strongly appreciate the interest for [in] an objective presentation of the current political situation [as] expressed by the European Commission.

In this respect [unnecessary], in order to respond to the concerns expressed at the level of [by] the European Commission, I would like to present, attached to this letter, the [my/our] responses to the matters you raised during our meeting. Please consider the clarifications made through [in] this letter as an expression of my personal, as well as Romanian Government’s [the Romanian government’s] commitment to respect the principles of the rule of law in Romania.

I would like to [unnecessary] assure you, Mr. President, [unnecessary – to whom else would he be referring?] that these demarches [archaic word meaning “steps” and slightly misused here] express Romania’s firm commitment towards [to] fully respecting its status, [unnecessary] as a member of the European Union.

Both I and the members of the Romanian Government [little g] are ready to offer any needed clarifications to the Commision‘s services, in view of [other wording needed here, at minimum should be “in THE view”] of a comprehensive and transparent communication about the developments [don’t need “the”] in Romania. Furthermore, we hope that these informations [this information] could consolidate accordingly [makes zero sense] the upcoming assessments regarding Romania’s progress within the Cooperation and Verification Mechanism.

Sheesh! Clearly this letter was written by a Romanian, especially with the “these informations” part. The sad part is I know literally hundreds of Romanians who speak and write better English. We already know that Ponta wrote (or had someone write) an illiterate letter to Nature to try and deny their article showing that he had plagiarized his 2003 doctoral dissertation.

I should add here (to be discussed in another post), the pathetic plea to not let the ongoing coup affect the latest MCV report was a complete failure. I’ve got the draft version and it’s a doozy and Ponta and the USL are rightfully shown to be trampling the laws.

I will now summarize the rest of Ponta’s July 16 letter to Barroso, which is a numbered list:

1 and 2 – We promise to change the referendum to remove Basescu from office (modified by “emergency decrees”) to be in line with the CCR’s requirement that 50% + 1 of the electorate has to vote in order for it to be valid.
3 – We promise to use “emergency decrees” only when it’s legal, which is any time really, but now we promise not to use it to misuse it anymore.
4 – We won’t change who controls the Monitorul Oficial but we we’ll make sure it publishes everything it is supposed to.
5 – We swear to God we will respect all decisions made by the CCR.
6 – The government swears it will respect the independence of the judiciary. Antonescu said this publicly on July 10 [after calling the CCR “a disgrace” just 8 days earlier].
7 – We promise to get an ombudsman (Avocatul Poporului) just as soon as we can that everyone can agree on.
8 – Don’t worry, the Justice Minister won’t remove Kovesi or Morar from the CSM/DNA.
9 – Antonescu promises not to pardon anyone *coughcoughNastase* before July 29
10 – We promise not to appoint any Ministers (every other position is fine) who have been declared guilty by the ANI (integrity agency).
11 – I, Ponta, officially asked the Parliament, who acts independently and completely outside of my power to control, to please get rid of all senators and representatives who have been found guilty by the ANI. Gosh I sure hope they listen to me.

And there you have it. The parliament is indeed in the midst of all kinds of things today so we’ll see how #1 and #2 come out.

#3 and #4 are “gimmes” and mean no change will take place whatsoever.

#7 could be delayed weeks and weeks if they want to.

#8 is mandatory and probably the most painful one to promise Barroso.

#9 is no problem because it’s just two more weeks to wait.

#10 means nothing as no new ministers are in line to be appointed.

And #11 is a farce and a joke. Clearly the USL dominates parliament and Ponta (and Antonescu) could get them to remove these corrupt bastards with ANI rulings against them tomorrow if they wanted to.

Ah well, at least it’s SOME progress. And in these crazy days, you’ve got to take whatever slight good you can get! Personally I just feel sorry for the poor bastards who are going to have to translate this document from “English” into the 20+ EU languages.

9 thoughts on “The text of Victor Ponta’s letter to EU Commission President Barroso, in which many lies and half-truths are told in broken, shitty English”