Over the weekend, I picked up this tiny little story (in Romanian) about an interview with Andrian Candu, the speaker of the Moldovan Parliament, that was printed in Latvijas Avize (in Latvian).

I assume that the original interview was in Russian, but since it was printed in Latvian, I had to rely on the internet to translate it for me.

At first, the interview seemed like a “nothing burger,” just another typical interaction with the press. But then, I saw something that caught my eye in his response to a question about “solutions” for Transnistria:

We believe that about 2,000 Russian soldiers in Transnistria are occupying forces. They organize joint exercises with the so-called Army of Transnistria. Russian army units pose security risks because it is an illegal military presence, like the Russian army in Abkhazia, South Ossetia, and Eastern Ukraine.

So far, nothing new. But then he added this:

Russia has violated international law. We intend to hire an international law firm to calculate the loss of Russia’s presence in Transnistria over a period of 25 years. The bill will be measured in billions of dollars.

That seemed pretty outrageous to me, but it’s now been repeated in English, so I’m going to assume that it’s an accurate translation.

What’s really interesting is that Candu gave his interview to Latvijas Avize on January 4, 2018, talking about hiring a legal firm at some point in the future. But I already know which “legal firm” will be hired – because they’ve already been hired.

The name of the firm is Cogent Strategies, which until two months ago was known as The Podesta Group.

To understand what’s going on, you have to remember that Moldova is not a democracy. A single man, an incredibly wealthy oligarch named Vlad Plahotnyuk, controls everything “behind the scenes” in his role as president of the “Democratic” Party (PDM).

The leader of the “opposition” is Andrian Candu, the speaker of the parliament, who heads up the “Truth and Dignity Platform.” But it’s all just a joke. Candu is the man who “subs in” for the President whenever Dodon gets suspended from office, and Candu is married to Plahotnyuk’s daughter.

A few years ago, a Plahotnyuk ally, Vlad Filat, was taken down after he had a falling out with his former “mentor”. To whom did he turn for help? A Moldovan law firm? Of course not.

McKew had previously worked with Mikhail Saakashvili, a guy who is so crazy that he’s even managed to alienate the government of Ukraine, a country where hating Russia is a national obsession.

McKew, despite her “expertise” in this region, speaks not one word of Russian (or Romanian). And neither does Kimberley Fritts, the head of Cogent Strategies, who is another obese American woman who is virulently anti-Russian despite not speaking the language.

Now, how do I know that Cogent Strategies is the firm that Candu said “will be hired” in the future? Well, it’s thanks to one of my allies. 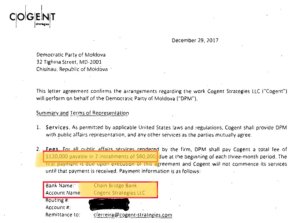 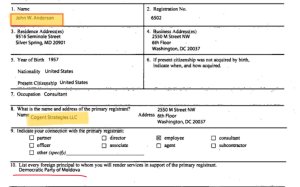 As you can see, Plahotnyuk’s Democratic Party of Moldova (PDM) hired several members of Cogent Strategies at the end of 2017.

Please, don’t ask where the money came from because you already know that you will never get an answer. Plahotnyuk is openly supported by the United States, the EU, and the Romanian governments, and only God knows how much he’s managed to siphon off from all the foreign aid given to Moldova.

Now, he’s hired “big guns” in Washington to make sure the (future) story sells, that Russia’s “illegal occupation” of Transnistria has cost Moldova “billions” of dollars.

To begin with, Russian troops in Transnistria aren’t there “illegally” (parsing the details will require a future post), but even if they were, there’s literally no way to calculate how much this has supposedly “cost” Moldova in financial terms. I mean how do you even start?

As for the rest of what Cogent’s propaganda will look like, well, we’ll just have to wait and see. But it’s always interesting to catch a sneak peek behind the curtain.