In case you’re afraid I’m going to make you read 5,000 words before getting to the conclusion, I’ll save you the trouble. The worst blogger in the world is clearly me.

Nearly four years ago (wow how time flies!) I wrote a fun little post called Flying Chocolately Goodness, all about how much I love TAROM. I still do. They were good to me 14 (!) years ago when I was a clueless American speaking no Romanian and they’ve been good to me when I was a fluent speaker flying on their excellent early morning Cluj-Bucharest route.

In fact, I love TAROM so much that I’ve been known to pop into their downtown office (here in Cluj) and just hang out and chat. They have a lovely but strange building all laid out in some kind of 1970’s kitsch and used to grow exotic plants in the window, including coffee (a tropical plant). I know they’ve been unprofitable for years but I’ve never found a friendlier airline with better food in my entire life.

So what makes me such a bad blogger? Well you have to understand that I wrote that post back in 2010 for free. A couple of days ago I saw the news story (in Romanian) about how an audit of TAROM showed that the airline was spending hundreds of thousands of euros on bonuses and “unjustified” expenditures. In the report was a line item noting that some 86 thousand euros were spent on getting blogs to promote the airline.

He’s saying here that (on average) each blogger received about 4000 euros for a year of promoting TAROM. This comes out to about 350 euros per month which Hoinaru says is the “normal going price” for such things, as is 200 euros per month for an advertising banner.

Just in case you’ve never worked in Romania, the minimum salary here is now 900 lei “brut” (gross) which even assuming there are no other payment liabilities (such as for the national health insurance fund, etc), 900 lei is about 200 euros. So for a single rotating ad banner, a Romanian blogger can earn “at normal market prices” the monthly salary of someone working for minimum wage.

Adding in the money for articles (350 euros per month) comes out to roughly 1,500 lei (or 15 “million” old lei) which means that the fees “earned” by these bloggers is roughly 2,400 lei (24 “million), a damned good salary here in Cluj for someone with both work experience as well as a university degree. In other words, these bloggers are making some damn fine money, equivalent to a good office job for a multinational company, all in exchange for approximately seven articles (in a year!) and a single ad banner on their blog.

But surely these are top bloggers, right? With enormous amounts of loyal readers and lots and lots of visitors and page views, right? It’s normal for TAROM to pay money on advertising so there’s nothing curious about hiring bloggers as part of that.

I decided to investigate the matter myself, using the site Alexa (dot com) because they are well-renowned for tracking rankings, page views and other “analytics” for websites. Above you can see the data for AdrianCiubotaru.ro, one of the blogs that got money from TAROM. 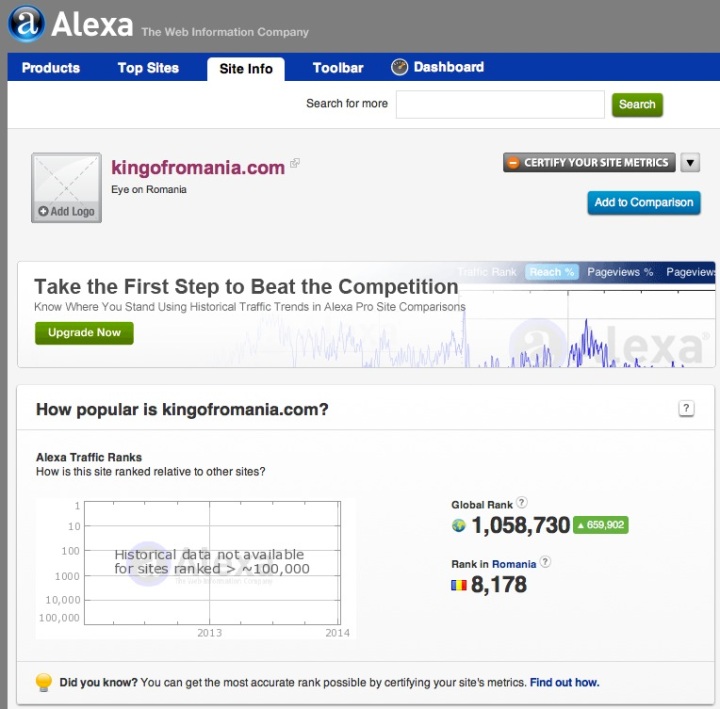 Now here’s my own little website. Notice anything? I’ve clearly got more “reach” in Romania (and indeed, the world) than a blogger that got paid by TAROM to advertise for them.

What makes this even worse is that Adrian Ciobotaru read Hoinaru’s post and wrote to him, saying that TAROM contacted him (Ciobotaru) directly and offered him the money. Did TAROM ever contact me? No, they sure didn’t. I write my love paeans for TAROM for free while he’s writing 152-word blurbs for a staggering amount of cash.

In April my blog will be four years old and in all that time I ran exactly one ad, one time (although it’s still in the archives) for a total of 25 bucks. I pay $20 a year to host this website and I allow WordPress to run its own little ads (which you see at the bottom of my posts) because they want me to pay them another $40 to not have them. The ads “bring in” about $5 a month which means that after a year I might clear about 40 dollars. That’s about 10 lei a month, which means I can take my girlfriend out for a coffee.

And that’s for writing extensively researched and documented articles on everything from politics to history to language, not to mention quite a few videos (as an example, my Christmas 2013 video took about 7 hours to produce, to say nothing about my two different documentary series).

This is why I’m the worst blogger in the world. As I discussed in my post pe aici nu se trece, all the smart bloggers in Romania write short, zippy posts of 200 words or less and then stand back and rake in all the page views and sweet advertising cash from big companies.

I started this blog back in April 2010 because it was something fun and enjoyable to do. It’s still exactly why I write what I write today, so I have no regrets. If I really was hell-bent on turning a blog into a cash machine I’d follow all the popular advice and write pieces like “10 Ways to Lose Weight” or “20 Secrets about Hollywood” or else review films or electronic geegaws (zomg the new Samsung Kosmos Infiniti 9 is amazeballs!) or offer up “tips” on how to use Facebook (or Snapchat or whatever “social media” thing is cool at the moment).

Am I a little hurt that TAROM didn’t even try to reach out to me? Well, yes I am. But am I sorry that I’m not Hoinaru or Chinezu or Groparu or Ciobotaru (geez these names all seem so similar) and whoring myself out with inane, trite bits of easily digestible pap for the teeming masses in exchange for cash? Not really.

I’m damned proud of everything I’ve ever written (and video produced), mistakes and all, and I absolutely love getting those lovely letters from people who have just discovered my site and tell me they spent hours reading my stuff and laughing and feel just a tiny bit better and more proud of their culture and heritage. I love hearing from people who shared a post of mine with all of their friends, and about how it brought smiles to their faces. It makes my heart feel good when people tell me that something I wrote made their life a bit better, made them think about things in a new and positive way. It is a real thrill and joy for me to see that someone on Reddit took the time to post a mash-up of my book about Romania.

I write and produce video and go on television because this is my passion and I have absolutely no regrets whatsoever about that. I can walk down the street with my head held high and when people stop me to tell me how they enjoyed something I wrote or said, when people come over to my table to shake my hand, when my own SMG’s parents call me up to tell me thank you for what I said about this country on television, that’s a really good feeling.

Much better, I should think, than regurgitating a press release for a few euros, hoping and praying that the fickle masses continue to visit my website, that the ad money can continue to come in and that one day I won’t have to wake up and go out and get a “real job”, telling any prospective employers that there’s a gaping hole in my CV because I spent all those years churning out superficial bullshit for short attention span morons.

So no easy money for me, I’m afraid. But I love doing what I do and hopefully so do all of you!