After my long article on fast-food, a number of people mentioned mici (meech), but what are they?

Clearly one of Romania’s most popular and enduring dishes, mici (literally: “small ones”) are sometimes known as mititei (meaty-tay), generally referred to in English as “sausages”. 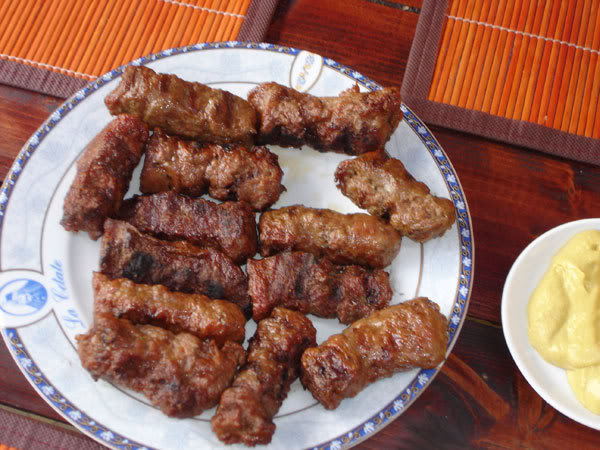 Unlike most of the concoctions you will find at a fast-food, mici truly are a Romanian, domestic creation, the story of the origin being that many years ago a well-known restaurant in Bucharest ran out of casings and so had to create a “sausage” right there on the spot to feed their hungry customers.

In general, a sausage is a combination of ground meat and spices mixed together and then injected into a casing, originally animal intestines but today sometimes made of a kind of edible plastic (I know).

What makes Romanian mici unique is that they have no casing – they are simply blends of meat and spices formed into a small “log” and grilled or pan-fried.

Because no casing is necessary, it’s rather easy to make mici at home, which you can do following this recipe in English or this one in Romanian.

If you look closely at the recipes, you see that the majority of the meat in mici is surprisingly beef, specifically cuts from the ceafa (chah-fah), which means the “back of the neck”, more commonly known as “chuck” in English and the source for (high-quality) hamburgers, amongst other things.

It is then mixed with a smaller portion of lamb meat as well as critical amounts of garlic and cumin, which give mici its unique flavor.

Mici are the “hot dog” of Romanian culture, the most ubiquitous form of “the common man’s meat” and are generally extremely inexpensive to buy, often sold in large packs (in grocery stores) precisely so you can cook them on your grill during a summer’s picnic.

It is extremely common to eat mici with a healthy dollop of “plain” yellow mustard, usually served on the side so that the eater can swirl each bite of mici in the sauce as desired. If you ever order mici, whether at a fast-food or “proper” restaurant, the mustard will always be served with it.

As some of the commenters have noted, mici are often served as “festival food”, served at concerts and summertime events. It is much rarer to find mici served at fast food restaurants, although some do, especially those who cater to the poorest customers (such as those who flock around train stations).

If you consume meat, I heartily recommend you try some mici, especially hot off the grill and swirled in mustard, accompanied by a beer of your choice.