Still busy as a beaver these days but here’s three little stories all in one post for your enjoyment!

The guy who absolutely insisted on a full Securitate dossier on me but never got one managed to make his money just fine, this time by selling a photograph of me to CanCan, Romania’s #2 gossip magazine.

If you’re a long-time reader of this website, you know that I can never rest until I appear in Click!, Romania’s best selling newspaper and the number one source of information for the indefatigable shitbird Alison Mutler. Being featured in Click! and get written about by Ms. Mutler is right at the top of my Romanian bucket list!

Speaking of shitbirds, I am glad to see that the civil case against Serban Huidu (link in Ro), the mass murdering, unfunny asshole who casually killed an entire family, is proceeding nicely. You might remember me writing about him before, noting that about a year ago he got away with a “suspended sentence” and a paltry fine of 300 lei (not even $100) after his luxury vehicle crushed an old Dacia like a tin can.

And last but not least, you probably know of my unvarnished enthusiasm for the politician Aurelia Cristea, who won her race and will soon be representing Unicorn City in the national parliament.

A number of people wrote to me to remind me that fancy promises don’t mean anything and that I should keep track of her accomplishments as a parliamentarian. Thank you for reminding me of this, as well as that the sky is blue. Of course, duh!

In fact, I am debating setting up either a special category here on this website or a new site altogether called “The Fourteen” specifically to track exactly what the hell the 10 representatives and 4 senators from Cluj do during the upcoming year. Frankly I’m sick of politicians promising lots of things, getting elected and then disappearing off to Bucharest where you never hear from them again unless they get involved in a scandal. 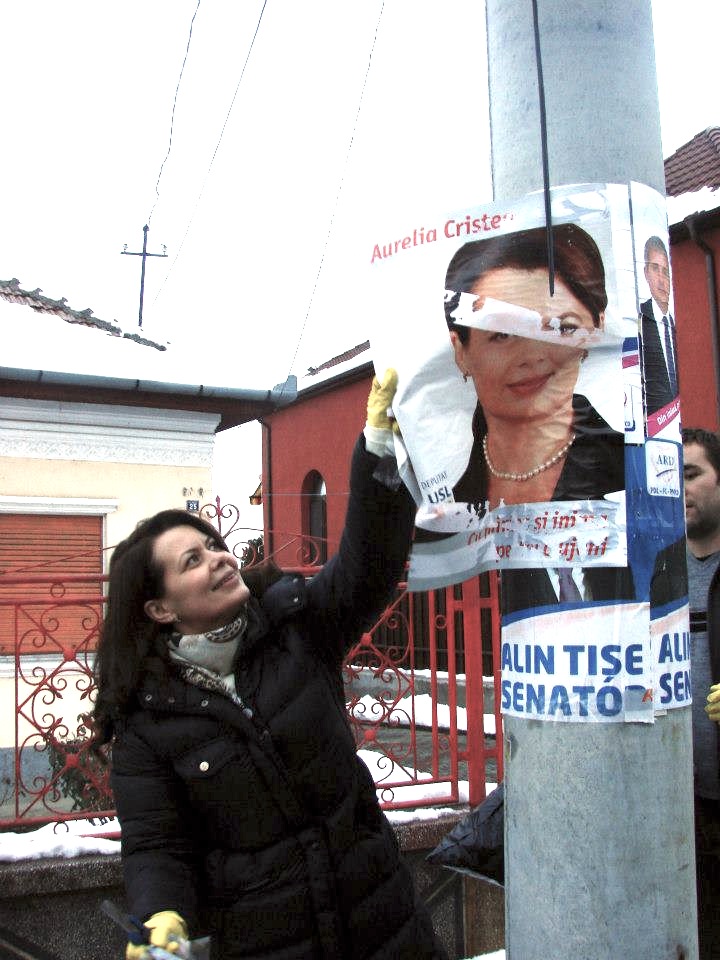 In the meantime, here’s an excellent picture (retouched by me as the original was horrible quality) of Aurelia Cristea doing the honorable thing and taking down her own political posters. It’s a little thing, yes, but it’s a good thing.

I know quality people when I meet them and I’ve already written about how I met her. So far she’s continuing to impress me, especially as I haven’t seen any of these other dipshits taking down their own posters. Awesome sauce!