Last weekend, my wife and I decided to go visit Transnistria, the “country that doesn’t exist”, but, of course, very much does exist.

But an unexpected burst of cold rain and a malfunctioning battery quickly turned our carefree day trip into something we could never have anticipated.

This is a true story.

Chisinau has several bus stations, but the one with daily shuttles to Transnistria is the big one located on Ismail Street just off of Stefan Cel Mare, the central boulevard in town.

Chisinau is a very densely populated city, so the central bus station is a bit of a madhouse. There are several different ticket windows, but the only one that sells tickets for Transnistria is called casa de bilete de pe peron (the ticket office located on the platform) on the lower, downhill corner of the bus station.

There’s a white piece of paper posted next to the window with these cities – Bender(y), Tiraspol, and Anenii Noi (it means “New Sandy Town”).

So far, so good. But then we noticed the Transnistrian guard lady posted just a few steps from the ticket window.

As the line inched closer to the glass, the Guard Lady would start shouting “Tiraspol! Bender!” in a very loud voice. Honestly, it was quite intimidating.

The guy in front of us bought a ticket to Anenii Noi, and the Guard Lady said nothing to him. But after she heard us buy a ticket to Tiraspol, she immediately began haranguing us in Russian.

My wife and I paused to take a selfie, and the Guard Lady began telling us about a Belgian tourist who had gone to Tiraspol the week prior and was caught taking photographs by the Transnistrian authorities.

Sufficiently chastened, we got on the bus, the woman’s warning ringing in our heads.

The traffic in Chisinau was jam-packed, so it took the bus about 30 minutes just to get to the other side of tow. And then we abruptly stopped on the side of the road.

The driver and the Guard Lady both popped out and began having an animated discussion. After about 10 minutes, she came back onboard the bus and told us (in Russian only) that the bus’s battery was malfunctioning and so we’d have to disembark and wait for a new bus.

After we all piled out of the bus, I noticed a guy who looked out of place. The first thing that caught my eye was his black baseball cap that said “Puerto Rico” on the front in white lettering.

I gave the guy a thorough looking over and instantly realized he was American. Beyond his hat, he was also wearing American shoes and an American T-shirt*. And then for final confirmation, I saw that he had a large paperback in English tucked under his arm.

* – For whatever reason, shoes bought in America are very easy to recognize. Also, Americans always wear T-shirts that are both a) with sleeves that have a very large diameter, and b) have a graphic and/or text on the front that means something personal to the wearer.

Okay, cool. I was very curious why Mr. Puerto Rico Hat would choose such a blustery and cold day to go to Transnistria. But before I could go talk to him and ask if he works for Vice magazine, the skies opened up and a bit of cold rain fell on us.

Luckily, the new bus came just a few minutes later, and so we were able to get on board, resume our journey, and also warm up.

In the normal course of events, the bus from Chisinau gets to Bender in about 90 minutes and in Tiraspol about 10-15 minutes later. Most of the journey is inside the Republic of Moldova, so you see a lot of brownish-green fields, a few houses, and not much else. My wife even fell asleep for a spell while I watched a Russian musical show on the bus’s TV.

But now here comes the border. Shit’s about to get real. 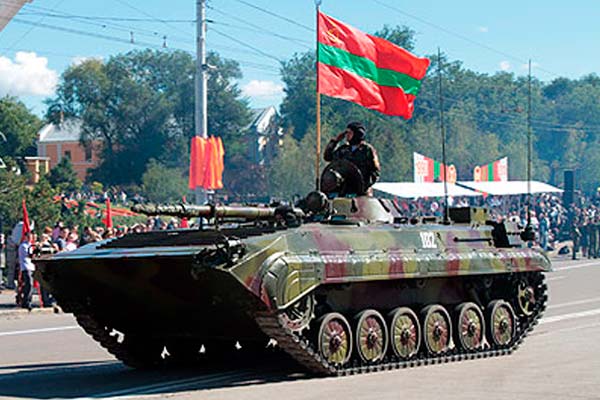 The Guard Lady began shouting at the passengers (in Russian, of course) about how we needed to go get “registered”.

When my wife and I hesitated, she urgently waved us on, so we quickly got off the bus and followed the herd into the “Migration Building.”

Since we’d already been warned not to take photographs, I’ll just have to use my words to describe what I saw.

We were standing on a two-lane road, and off to both sides was very large fields of grass. Ahead, I could see the Migration Building with a huge sign out front written in Russian.

There are two entrance doors into the Migration Building, but once inside, you can see that it’s not very deep. Half the room is separated from the other half by a series of what look exactly like bank teller windows. When I was there, only two windows out of five were open.

The building is so small that a single busload of people plus one car caused the Migration office to be jam-packed.

What happened next was quite surreal.

To get registered, you have to shove your way forward every time someone gets approved to enter Transnistria and then turns around to leave.

You then have to wave your documents around when you get close to one of the working windows in the hopes that a Transnistrian border guard will choose your papers to grab.

Not feeling confident enough to be aggressive, my wife and I hung back for a bit.

In all the pushing and shoving, we saw a couple of people get rejected, but we didn’t see/hear enough to figure out why.

The Guard Lady spied us in the corner and pushed her way through the crowd to get us first in line at one of the windows. Without asking, the lady then took both my and my wife’s documents and then start chatting up the Transnistrian border guard.

Ordinarily, anyone with a valid passport can enter Transnistria without a visa. But there is a time limit on that visa – 10 hours.

When both my wife and I successfully got accepted, we were given a printed receipt that told us exactly when we had to be out of the country – 22:33:11.

We were warned not to be even a second late, or we’d be considered criminals.

Having run the (literal) gauntlet of the visa approval process, I watched with interest to see what would happen when Mr. Puerto Rico Hat approached the other window.

Unlike how she had done with us, the Guard Lady did nothing to intervene in Mr. Puerto Rico Hat’s case, so he had to get by purely in English.

Somehow, he successfully got registered and was allowed to get back on the bus.

The Corner of Marx and Lenin Street

We then all piled back on the bus and in short order were in Tiraspol, the capital of the breakaway republic of Transnistria.

The bus made several stops along the way, so there were only a few passengers left by the time we got to the final station – the combined bus/train station on the east side of town.

After getting off the bus, my wife and I paused a moment to get our bearings and take in the view. Spotting Mr. Puerto Rico Hat still among our number, I casually approached him.

Wife: Oh, is it for business?

We shrugged our shoulders and headed over to a nearby currency exchange window to get our hands on some Transnistrian rubles.

While we were waiting in line, we saw Mr. PRH wandering around, clearly lost and/or confused. I waved to him, but he pretended to not see me and headed off down the street.

Despite the fact that we spent the entire day in town at the festivities, we never saw Mr. PRH again. The last glimpse we had of him was with his hands scrunched in his pockets, big book tucked under his arm, and an anxious and angry look on his face.

My wife and I, however, had a wonderful time in Transnistria. I mostly just wrote this article because it’s what people expect to hear about the country after reading garbage like this all the time.