Recently, a person whom I’ve known for many years asked me about why I haven’t included more entries in the “My Personal Life” category. What can I say? Sometimes, I honestly forget that anything I do might be of interest to anyone else. But since you asked, you shall receive!

The Republic of Moldova is officially The Poorest Country in Europe™, but there is one area in which Moldova is at the top of the pack – grapes and wine. You’ll have to travel here to try the grapes (spoiler: they’re delicious!) but you just might be lucky enough to find Moldovan wine at your local shop.

True fact: I distinctly remember trying a bottle of Moldovan wine in 1998 back when I lived in the United States and couldn’t find Moldova on a map. I have no idea which kind of wine it was, or from which winery, but I do remember thinking I was now “cool” because I was drinking something “from Europe” LOL.

A few other countries like France and (the Republic of) Georgia might disagree that Moldovan wine is the best in the world, but no matter who you ask, Moldovan wine is right near the top of the list. And every year in October, Moldova celebrates “Wine Day,” which is actually two days and is officially called Ziua nationala a vinului” or “The national day of wine” in the state language.

This year, Wine Day (officially called Wine Day 1 and Wine Day 2) was held this past weekend, October 7-8, 2017, and my wife and I decided to go and see what all the fuss was about. Despite both of us having lived here for years, oddly enough, neither of us had ever been.

The way the festival “works” is that you pay 200 MDL ($11.4 USD/9.7 euro/45 Romanian lei) and you get a commemorative plastic wine glass and a coupon booklet. The coupon booklet has 23 tear-off tickets, each to one of the 23 Moldovan wineries at the festival. You then exchange a ticket for a “glass” of wine.

Because it’s Moldova, sometimes you get a full glass, sometimes a half a glass, and sometimes a third of a glass. Or you just smile and chat with the wine pouring person and they’ll refill you multiple times for free. Also, three of the “wines” were cognac, which is made from grapes but is definitely liquor and not actually wine *ahem*.

Your coupon booklet also contains a 24th ticket that you can use at any winery. The 24th ticket is for whichever wine that you decided was your favorite. Our choice was a Chardonnay from Gitana. And yes, the name means “Gypsy Woman” in Spanish but the winery was founded by two Greek brothers. Don’t ask.

The worst “wine” was definitely the Călărași Divin. My mother-in-law loves the stuff, but I think it has an awful, bitter aftertaste. If you really want a high quality Moldovan cognac, choose Kvint every time.

You also get two free city bus tickets, which is a nice touch. No matter how drunk you get, you get a free ride home!

Each winery had their own fancy tent or set-up, including some that were quite impressive. Others went for a more rustic look.

On Saturday, there was quite a crowd during the day, so the way to get to your free glass was to look for this sign (translation: Tasting Based on the Coupon HERE). 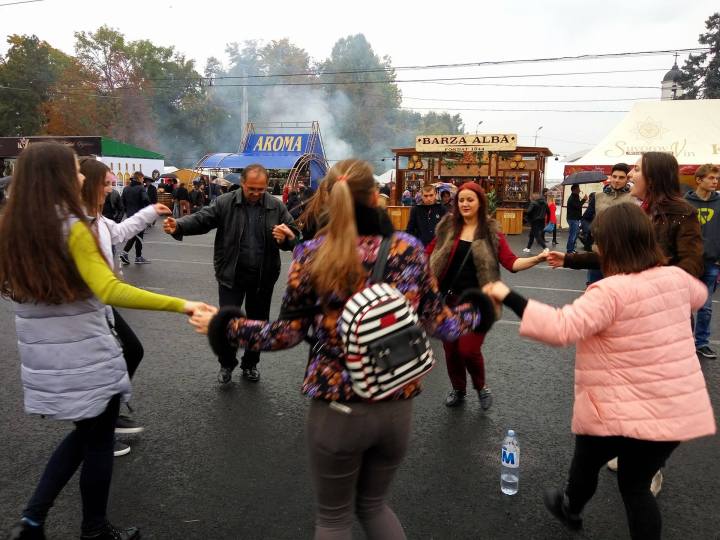 Once the wine was flowing, everyone was in a good mood. Above you can see some people spontaneously dancing the hora. 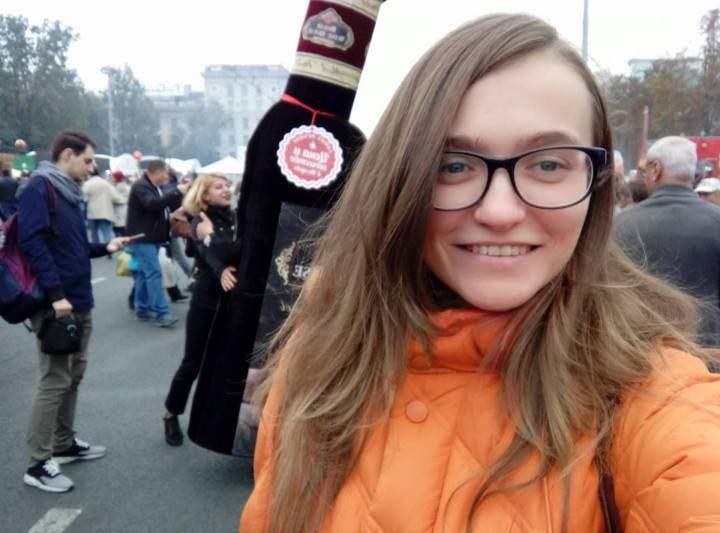 Here’s my lovely wife taking a selfie in front of a dancing bottle of wine.

Happy Wine Days participants were more than eager to share their love with the dancing wine bottle.

Oddly, the two biggest sponsors of the event were the American government and the government of Sweden. The Romanian-language motto for the event (O legenda vie) is badly mistranslated at the top (click on any image to see it full-sized). It should say “A living legend,” but hey, why bother asking one of your main sponsors (USAID) for help in translating?

True fact: Through sheer coincidence or cosmic karma, I actually ran into a Swedish guy I know during the event and he was with a group of other Swedes. None of them had any clue whatsoever that their government was sponsoring this event. I had a lot of fun teasing them about how their grandma’s taxes were going towards getting Moldovans drunk :P

All the drinking got people pretty hungry. Everywhere, there were people selling Moldovans’ two favorite foods – grilled meat (chicken or pork) and placinte. In the enormous frying pan pictured above, you can see a woman cooking up some placinte, a kind of “stuffed pancake” filled with cheese (brânză) and fresh, chopped dill.

Of course, this being Moldova, some people decided to be enterprising. We stumbled upon this lady behind one of the winery tents who was filling up a plastic bottle with the dregs left behind from discarded wine bottles. Pretty smart!

Unfortunately for the organizers, Moldova experienced some unusually bad weather this weekend. It was already cold and overcast on Saturday morning, but it began raining in the afternoon. The hard rain continued throughout all of Sunday, and so there were no crowds whatsoever on the second day. Bad for business, I’m sure, but good for us dedicated wine lovers with warm coats ;)

More than half the people we saw on Sunday were clearly tourists. I have no idea why they were out in the freezing rain to drink wine, but I guess there wasn’t anything better to do in town. I even saw a few poor lost souls wearing shorts, for goodness’ sake.

In summation, Wine Days is a really great way to get to know Moldovan wines better, and you will definitely feel “warm and cozy” on the inside by the time you’re done even if the weather is unusually rainy and cold. Best of all, if you do find a wine you like, you can buy it directly from the producer at prices far better than you’ll find in local shops.

Thanks to the American and Swedish government, there was lots of live music, so thank you and tusen tack for that. Every Moldovan definitely was inspired by your selfless example of moral leadership :P

AND NOW YOU KNOW ABOUT WINE DAYS IN MOLDOVA!